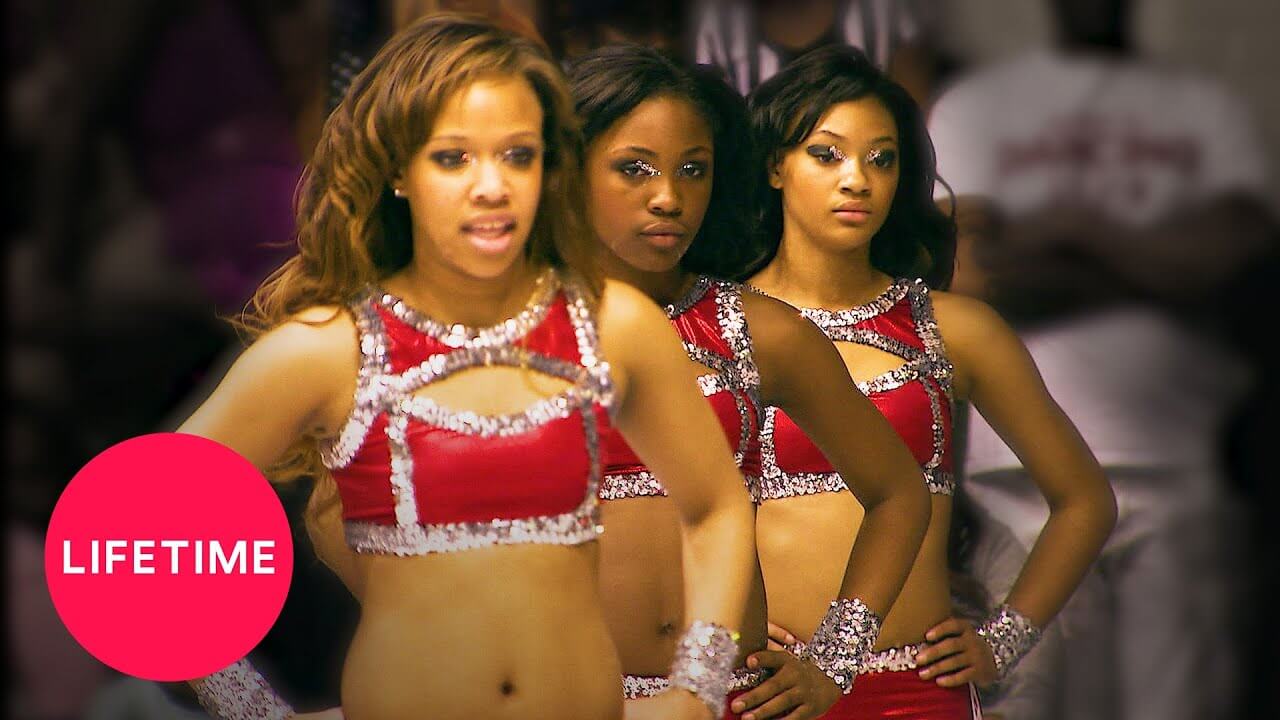 ANNOUNCER: Everybody,
hands on up! We are in New Orleans. We're about to get out here
and battle the Infamous Dancerettes, and
John has been whining because the Dancing Dolls kicked
your ass, and now you salty. That's OK, because today I got
a sponge, a bucket, some paper towels, some tissue to
wipe all those tears, and to catch those
tears for you. Hello. Hey. Y'all OK? So, so, so we
in the last round. Last round. I've been hearing that you've
been sneaking to competitions, coming to check us out, and– Oh, yeah. I had to do my homework. Had to see what was going on. Well, that's good.

I'm glad you've
been taking notes. You've been at
competitions, sneaking and hiding in the back like a
damn rat hiding in the wall. Since you've had a professional
look into what the Dancing Dolls' choreography
should look like, maybe your team might win today. No, not really. I hope y'all ready. Make sure you do
us justice, now. If you're gonna use some of
our stuff, give us justice. Oh, trust me. Trust me. I know for a fact that I will
take the Dolls by surprise. I've seen videos this season,
even though we haven't gone up against them yet. Hope you guys are ready. Hope you are, too. Come on, y'all! ANNOUNCER: Let me hear
you make some noise! Today is the
competition day, and I'm excited to see how the
stand battle is going to go. I was like, yes, it's time.

We ready? You ready? So I was pumped,
and I was ready. [cheering] A few things that the judges
should be looking out for– I took key points
from the Dancing Dolls to put showcase in my stance. I did this to showcase
that we can do it better. The clean way. I feel like John has a
couple of tricks up his sleeve. John is going to try to use
everything that he can to try to knock us out the
box, but we're just going to dance our butts off. [music playing] Hands up! [music] Do you want
to be a champion? Got what it takes
to be a champion? Yeah.

Yeah. I'm looking at this up down
stand, and there's something– a little signature
move– that we took from the
Dancing Dolls, just to showcase that we can do it. It's just showcasing that we're
tired of seeing this move. You do this move almost every
time you come to perform, so now it's time
to move on from it. Really? Oh! John's girls start
to do the up downs. I'm like, here we go. Up, down, up, down,
up, down, up, down. The crowd likes it
because they know that it is a signature move. It's something that
we're known for. [music] I think I'm
built to be a champion. Seriously? You chose to mock that from
us, and do us like that? I feel insulted.

Was that supposed to be me? No.
Move along. [music] I think I'm
built to be a champion. JOHN: When I see the look on
the faces of the Dancing Dolls, I laugh because I know
that they're saying, I know he didn't. Go on, give me props, baby. You know I brought it. You know I– you know
I put it out there. [applause] What's up, baby? Bring it! ANNOUNCER: Dancing
Dolls in the building! There's too much of
Dancing Doll choreo in that. And I get taking little bits
and pieces here and there. Makes total sense to try to
utilize some of our stands and throw it back at us–
but not every single thing. It should be bits and pieces,
and that was too much.

So we're going to
show you that my team knows how to do it right. [music playing] John, baby, you're about
to get a real life lesson. Watch the Dancing Dolls. Watch how it's
supposed to be done. [music] From the west side. Got money in the bank,
got money in the sofa. Money in the safe, got
money in a holster. If you ask for
rights, I'mma tell ya. It's all about money. Let 'em know this. [cheering] [music] They know this. I'mma tell you–
all about money. From the west side– Watching my girls do the
up downs the way we do them, it's always fun to me. And John is trying
to turn his head, I'm like, no, John,
don't turn your head. I need for you to watch. You came to the
competition to be nosy. You were online, watching. So now you can watch
it in living color. And yeah, you're going to cry. You're crying because your
stand wasn't as good as mine, and you know it.

Bop, bop. Pay attention. Smack! I just wanted to show you
that these little simple moves that you're doing,
it's nothing to us. Smack!
Bop! Pop! Bop, bop, bop! Make it so you know. That's all. [music] Stay with my dogs
like "Blue's Clues," Blessed with the crib, that's new news. [cheering] Oh! Oh! Uh-oh! Look at 'em! Oh! Woo! Woo!.